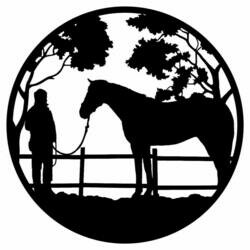 Richard Maxwell Online provides specialists products for the equestrian industry. Including any training equipment he uses on  a day to day basis plus Max Gut-Health, a supplement that has been a game changer for many horses and owners he comes into contact with.

You can find out more about Richard Maxwell's equestrian services at his website http://www.richard-maxwell.com 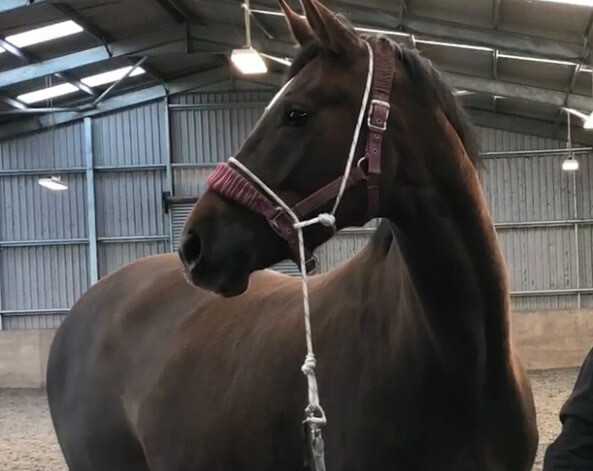 Handmade in house, this pressure and release halter is made of the highest quality 8mm marine braid on braid rope. We use this rope so that you get an instant release as it is quite slippy. If the rope is rough then it has the potential to catch and will slow down the release of the halter which then cheats the horse when he gives you the required behaviour.

The halter work I do with these halters is the cornerstone of everything I do, they are excellent for teaching your horse to lead, load and to work through situation to enable on going training. I generally put them on over a head collar, the nose band of the halter sits just about the nose band of a well fitted head collar, this will help to keep the halter in place so that it doesn't slip down to the sensitive part of the nose.

Each halter comes with instructional dvd, if you need another format please contact us directly.

Contact us direct for postage charges outside of the UK

Save this product for later
Display prices in: GBP

My 12 year old sports horse Spud has been on Gut Health for about 8 months. He has a complex veterinary history as he was desperately ill with a pasturella infection which required three surgeries, staggering amounts of medication, a lot of after care and has taken him several years at least to fully recover from. Even before his illness, he’s always got tense and unfocussed under saddle and took a long time to relax into his work and while he doesn’t have ulcers that discomfort was clearly from the gut. Quite soon after starting him on Max Gut Health, he showed improvement in that he was less tense during work, was more relaxed through his body, more focussed and he’s continued to improve in his ridden work but this summer has shown an unexpected and extremely welcome consequence of being on Gut Health.

Spud suffers from Sweet Itch and like other owners of itchy horses, I dread the summer. In the past, he has rubbed bloodied pits into his mane and tail, sores between his buttocks and under his dock. I have tried everything, trust me, everything. Every single type of rug, every single supplement, veterinary solution, topical ointments, antihistamines.. you name it. I’ve spent a small fortune. Last year I arrived at an ok-ish place with a balance of treatments and a really good rug that sort of worked in that he still rubbed but not to the point of bleeding. His mane and tail were bald but at least there was no blood and broken skin.

This summer… he hasn’t itched. he hasn’t rubbed. At all. There’s no disturbance to his mane and tail. There are no sores. he doesn’t come into his stable and immediately start flailing himself against the side of the door and window. He rests and snoozes. It’s mid-June, by now, he should be looking moth-eaten but he doesn’t. He looks great. And the only thing that’s changed in his management is that he’s on Max Gut Health. That’s the only thing that I can put this improvement down to.

I’ve even let him be without his bug rug which is obviously more comfortable for him in the heat. It’s genuinely startling because the benefits to his gut is palpable with how much more rideable he is but I wasn’t expecting such a demonstration of the systemic relationship between gut and skin. I wonder if any other owners of horses who suffer with Sweet Itch have noticed similar improvements but I’m just so chuffed that this year, for the first time, I’m not stressed to the teeth about Spud’s skin. So, like I said above, an unelected and extremely welcome consequence of long term use of Max Gut Health. And the relief is enormous. We can enjoy the summer now!

Sarah Phelps
A much happier horse this summer

Mojo is a 14.2hh 10 year old Connemara pony. We bought him as a project for my daughter as he was a lovely boy but had not been started well & had issues. He hated being groomed especially underneath & was very spooky & nervous. We had him on a good calmer that did help, but then I saw gut-health & read the info & though wow that sounds very like mojo & thought I'd give it a try. I'm not a huge supplement fan, so wasn't expecting to see any change, however within 2 weeks he was noticeably different. I hadn't told my daughter I'd put him on something new & she was commenting how much better he was out hacking & less spooky. The biggest difference is when I ran out & within 3 days he was changing back to the grumpy pony. Thank goodness it comes quickly after ordering !! He's not been off it since & I've now put her other pony on it just to support his gut. My horses always have ad-lib forage & go out in the field every day, but Mojo obviously needs some gut support. He's hopefully starting his eventing career when the season starts

I started the Gut Supplement after my 4 yr old previously as sweet as pie horse had become extremely aggressive and animated , I started the supplement and within weeks I could not believe the change in him, he had gone from attacking me in the field with all legs flying to reading all my signals and doing all our exercises with the slightest touch, movement by me , he completely settled back to his sweet self . Staying in his own space and out of my personal space , I have continued on with the supplement and see improvements all the time, easier to handle , picks things up so much quicker and concentration so much better , will be a fixture in my feed room from now on , can't thank them enough .

Lisa & Maestro
I couldnt believe the change in my horse 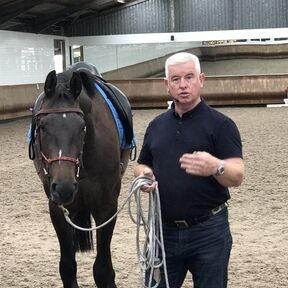 Richard Maxwell is a well known equestrian specialist. This online store carries tried and tested products recommended by Richard for use with your